Stirling Maynard are proud to be working for British Sugar plc alongside GBM Demolition and Rapleys providing civil, structural and infrastructure engineering advice in relation to the demolition and redevelopment of the former British Sugar HQ on Oundle Road, Peterborough along with site investigation services. 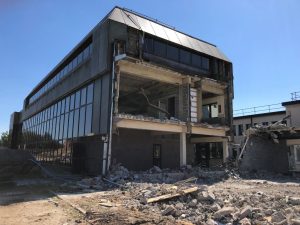 The former HQ complex is making way for a supermarket and a 74-unit residential estate.  Work is due to start on the new supermarket in July 2020 with the residential part of the site currently being marketed by Rapleys.

Andrew Leadbetter is our new Associate Director managing the Drainage and Infrastructure team.  He comes on board as David Arthur starts to ease into retirement after serving Stirling Maynard for over 40 years.

Andrew   was   the   Sustainable   Drainage   Manager   at Peterborough  City  Council,  where  he  led  the  team  that ensured sustainable drainage (SuDS) became prominent throughout Peterborough and was instrumental in the Highway Authority adopting sustainable drainage.   Before joining the Council he worked for the Environment Agency for 12 years as a technical  specialist  assessing  flood risk  and  drainage strategies.

Along with several others he has helped write the guidance to go alongside the government’s National Standards  for  Sustainable Drainage and  started  the  Association of  SuDS  Authorities .  Andrew was also a member of the Project Steering Group for updating the CIRIA SuDS Manual.

Andrew brings a wealth of knowledge in terms of surface water and drainage with a specialism in SuDS. He has achieved success in a number of schemes which at the start had very little in the way of SuDS.  This was recognised by susdrain in their 2018 awards where he was presented with an award in the category of new build larger scale SuDS – Awarded for projects that demonstrate effective, engaging & efficient surface water management where SuDS were not planned at the outset.  He also proactively engaged with the designer on the Councils flagship regeneration sites, Fletton Quays, saving nearly £1 million in costs through the implementation of creative SuDS solutions utilising raingardens, permeable paved roads (adopted by the LHA), bio retention areas and attenuation.

Stirling Maynard are delighted to have been involved in this £13M project to construct a brand new IBA processing plant for Ballast Phoenix, completed in October 2019.  We worked with Ballast Phoenix and their planning consultant to produce the planning layouts and drainage strategy to achieve Planning Consent and obtain the required Environmental Permit for the site.  Stirling Maynard then undertook the detailed civil, structural and drainage design and worked with the Clients NEC4 Project Manager to deliver the scheme.  We employed sub-consultant partners to carry out the M&E and building services design as well the architectural design of the office and welfare facilities. Stirling Maynard undertook the role of Principal Designer working with our own sub-consultants as well as the Client’s own process design engineer and other project stakeholders to complete the design of this state-of-the-art facility.  Subsequently Principal Contractor Clugston Construction completed the civil engineering and building works on budget and with no lost time injuries. 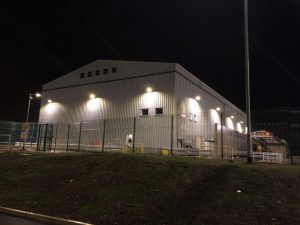 David York, Chairman of Ballast Phoenix was pleased to give the following testimonial on completion of the project.

“The project encountered some major challenges, requiring significant design change.  Stirling Maynard reacted promptly, communicated clearly and had a good understanding of what was needed.  As a result, programme impact and associated cost was minimised.”

In recognition of David Arthur and Derek Shea’s 40 years long service to the Company, Stirling Maynard held an informal celebration to mark the occasion. 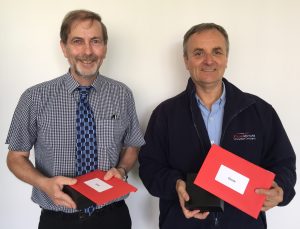 David and Derek with their gifts.

Derek joined Stirling Maynard on 30 July and David a week later on 6 August in 1979.

They began their careers as Graduate Engineers on completion of their degrees at University.  As Project Engineers they were involved in many projects including overseas in in Antigua.

In May 1990 they were appointed Associates to the Company and then in January 2001, Associate Directors.

Chocolate cake in celebration of their 40 years service.

Both Derek and David have been integral in Stirling Maynard’s continued success over the past 40 years, bestowing their considerable experience and technical knowledge to the benefit of all those engineers passing through or still with the Company.

In recognition of their invaluable contribution to Stirling Maynard, the staff and Directors presented Derek and David with engraved mementos and ‘Red Letter Day’ gifts to mark their long service to the Company.

Jim retires after 29 years of service

AFTER 29 years of service to Stirling Maynard, Jim Duffin retired as a Director in April 2019.

Jim’s many years of service were recognised at a special retirement gathering attended by friends and colleagues. 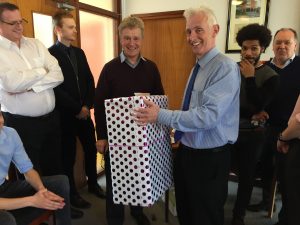 He graduated from the City University London in 1984, and initially worked for Gleeson Civil Engineering.

Jim joined Stirling Maynard in 1990 as a Civil/Structural Engineer where he worked on a wide range of projects going on to specialise in Civil & Water Engineering, Planning, Waste Management, Sustainability/ Environmental and Project Management.

Considerable experience
Over the years Jim (pictured above in blue shirt) has been heavily involved in the design and supervision of many civil and structural engineering projects for Pharmaceutical Companies, British Sugar plc, The Environment Agency, local authorities and many more.

He also has built up considerable experience in the design, project management, construction supervision and contract management of reservoir projects.

“With nearly 40 years’ experience in civil and structural engineering, Jim’s service to Stirling Maynard has been invaluable and the Stirling Maynard team thank him for all his efforts” said Huw West, Managing Director. 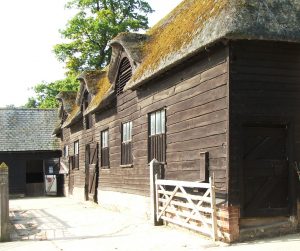 Stirling Maynard have been working collaboratively to successfully complete a major refurbishment of the ‘Big Barn’ at Home Farm. 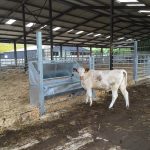 A project to refurbish the Big Barn was conceived in 2015 to realise the National Trust’s ambition of providing updated facilities for the farm’s rare breeds of cattle.  Stirling Maynard were involved as a key member of the design team as the project progressed throughout the year and into 2016.

Our team contributed civil engineering advice to the multi-disciplinary team during the planning and costing stage of the project, and actively participated in progress meetings as the refurbishment entered the construction stage. 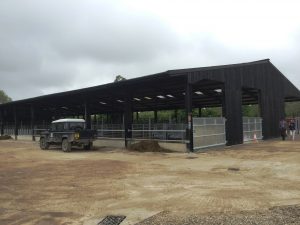 Stirling Maynard’s duties involved producing an assessment of the condition of existing below-ground drainage, and providing a new design that included: 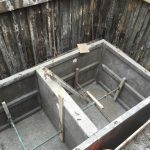 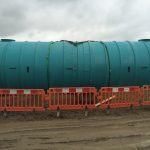 In addition to the refurbishment, the project included the construction of a new storage building at Cambridge Road Farm, which also forms part of the Wimpole Estate.  This update to the site’s facilities will assist with the daily tasks involved in caring for the Estate’s many animals. 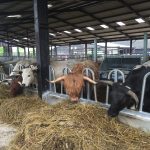 With the refurbishment now complete, conditions for the cattle housed at the Big Barn have significantly improved.  The project has been part of updates to the farm’s operations and animal facilities. 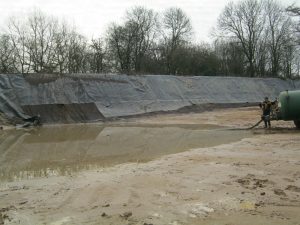 Stirling Maynard is currently involved in the design of an essential repair scheme for Troston Farms Ltd, after an agitator malfunction resulted in critical damage to its Suffolk-based pig slurry lagoon.

The lagoon sustained serious harm to its geomembrane lining system, and was emptied earlier in 2016 to facilitate the necessary repairs. This process revealed that the 1mm thick liner had split, with slurry present between the liner and the geotextile.

Anecdotal evidence suggests that the 5000m³ lagoon was originally constructed by Anglian Water, and later repurposed as a pig slurry lagoon as part of Troston Farms Ltd’s activities.  The build up of sludge below the liner — observed during the emptying process — was evidence that improvements needed to be made to the lagoon’s original design for the farming company to continue using the facility to store slurry. 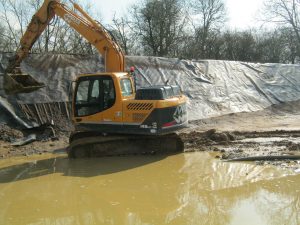 Troston Farms Ltd notified the Environment Agency, who provided guidance on the investigation and laboratory permeability testing required to investigate the issue. Stirling Maynard were then appointed to organise the task; designing a shallow testing regime to investigate an assumed 1m thick placed clay lining beneath the surface of the geotextile, thought to be present due to the permeable nature of the area’s natural sub-soils.

Whilst the results of the laboratory test demonstrated acceptable values of permeability in most of the shallow sampled material, not all of the samples complied with the standards set by the Environment Agency. Our team’s investigation demonstrated that the assumed placed clay lining was not present, and although a substantial quantity of clay was discovered, it had been combined with other made ground. 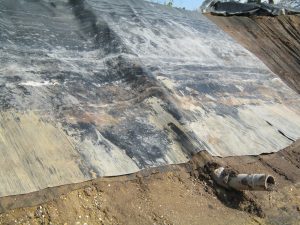 Through discussions between Troston Farms Ltd and the Environment Agency, an agreement was reached to repair the lagoon using a replacement 1.5mm thick single HDPE lining system with a puncture resistant geotextile underlay. Miles Water Engineering Ltd will be providing the products used in the repair scheme due to their early contractor involvement input.

Stirling Maynard’s design scheme takes recommendations from the Environment Agency to incorporate a combined leak detection and gas ventilation system below the liner’s surface. The liner itself is being completely replaced to help prevent future incidents and ensure the lagoon is suitable for the storage of water and liquids for years to come.